Explore Düsseldorf by bike, visit every corner of the city without stress, stop anywhere you like without having to worry about parking and, as an added bonus, you can keep fit at the same time! The city’s tour recommendations will also give you the chance to see some of the less well-known sights.
Photo: Tourismus NRW - Photographer: Dominik Ketz 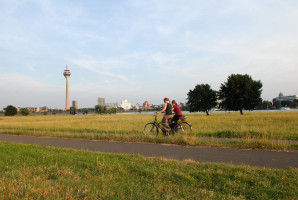 The most sustainable way to explore Düsseldorf 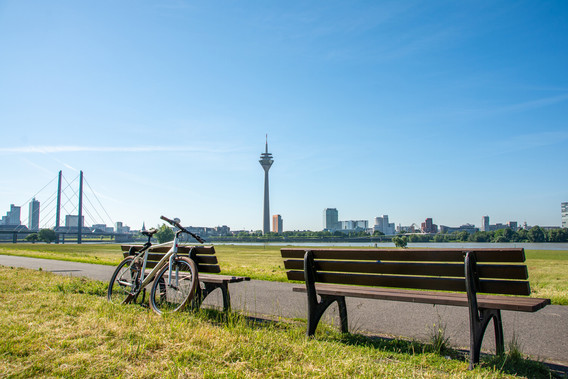 Discover the Rhine and Beuys

Get pedalling and explore Düsseldorf by bike. With its short distances, many sights within easy reach, and few hills, the city is so bike-friendly – which lets you see Düsseldorf from an ultra-exciting perspective.

Take a look at RADschlag, the City of Düsseldorf’s cycling website. It tells you everything you need to know about cycling here – from online navigation to a list of bike hire companies to attractive bike tours of the city. This website will also tell you where to find the city’s cycle-track network or suggestions for appealing cycling routes.

Or you can simply download our RADschlag app to your smartphone. It contains not only interesting info, but also offers you up-to-the-minute bike navigation through the city, perfectly tuned to Düsseldorf, and with hundreds of points of interest (POI).

Explore and enjoy Düsseldorf and the surrounding area on attractive bike tours. This will allow you to discover sights that you hardly even notice when you’re in a car or some other vehicle. It’s worth it!

It isn’t only the state capital but also the surrounding region that offers cyclists so many choices.

No fewer than five cycle routes go through both the Düsseldorf city area and the surrounding area. Take the Lower Rhine and Kaiser Route to see important regional sights such as the fortified Veste Zons, the Neanderthal Museum or the Museum Insel Hombroich.

If you’re planning tours in and around Düsseldorf, the Radroutenplaner NRW (Cycle Route Planner NRW) will come in handy. Use it online to work out a route from door to door, and find out about lots of sights and excursion destinations.

In Düsseldorf the Radverkehrsnetz NRW (Cycle Track Network NRW) is marked over a distance of 96 km. A free cycling map provides an overview of the marked routes in the city area and the neighbouring towns and communities.

The map also contains lots of information about the City of Düsseldorf, the type and function of the signage used, and useful facts about cycling.

The most beautiful sights in the Rhenish metropolis of Düsseldorf are situated directly on the Erlebnisweg Rheinschiene (Rheinschiene Adventure Route).

The RheinRadWeg NRW (RhineCycleRoute NRW) runs alongside the Rhine on both sides of the river over more than 42 exciting kilometres in the Düsseldorf city area alone.

The NiederRheinroute (Lower Rhine Route) takes in a total of 1,215 km main and 820 km secondary roads, allowing cyclists to explore the region from Isselburg in the north to Übach-Palenberg in the south. Bounded in the west by the Netherlands, the eastern outliers of the route go as far as Duisburg and extend to the gates of the state capital Düsseldorf.

If you don’t bring your own bike with you, there are several options for hiring one in Düsseldorf.

You are sure to find the right bike in the state capital, be it at a pick-up point or using a flexible hire system. Or you can use the City of Düsseldorf’s RADschlag Service, to navigate directly to the nearest bike hire company.

This bicycle workshop offers a wide variety of bike-related services such as bike repair, second-hand bikes or used parts.
You can also hire 20 to 28-inch bikes, helmets and children’s seats, or park your own bike safely. A total of 450 bikes can be stored here.

Düsseldorf is home to 10 cyclist-friendly hotels which are adapted to the special needs of cycling guests and are listed by the Allgemeiner Deutscher Fahrrad-Club e.V. (ADFC) in its “Bett+Bike Accommodation Directory”. Only those who meet the ADFC’s quality criteria are permitted to display the sought-after “Bett+Bike” (Bed+Bike) sign which indicates that cyclists are welcome.