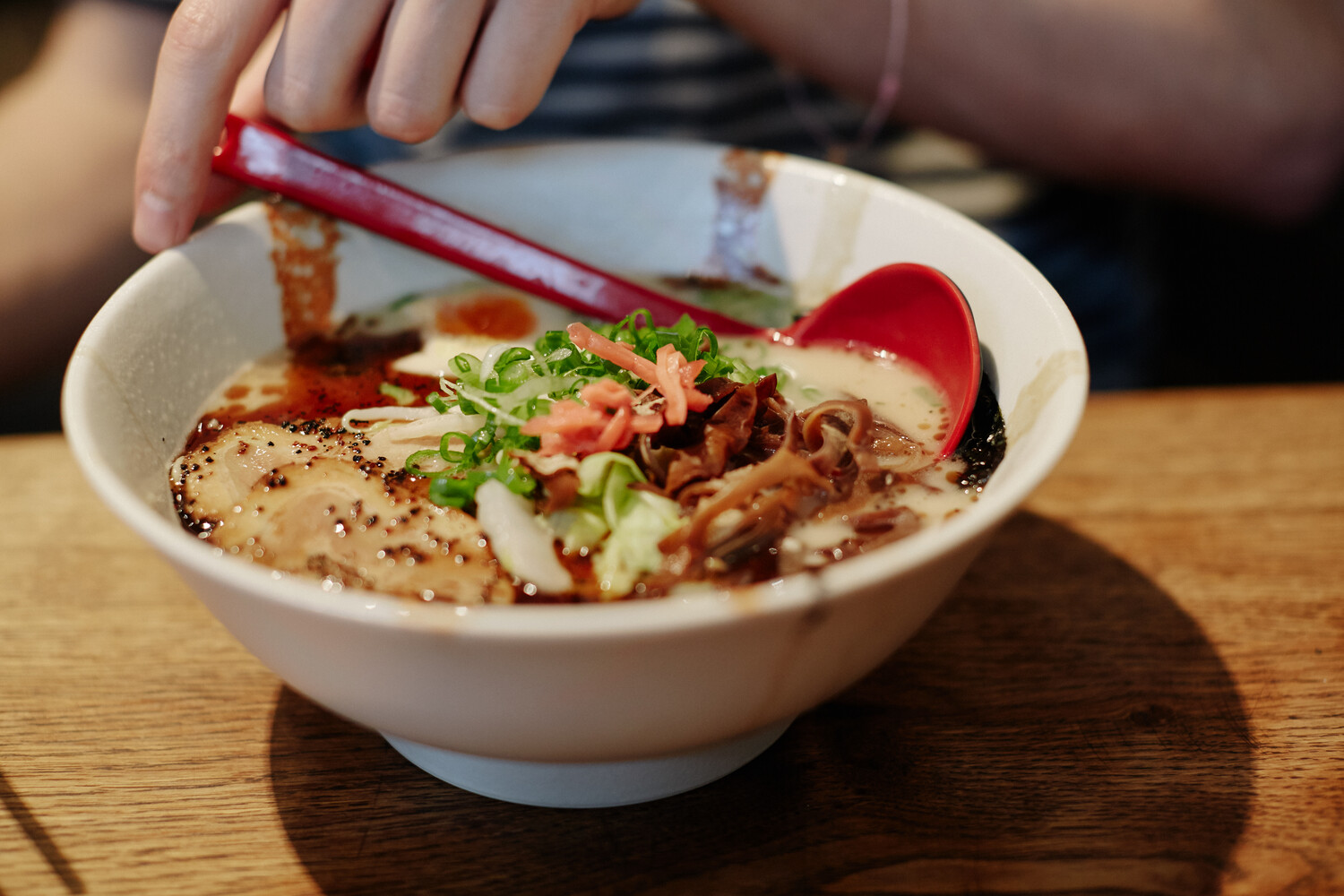 Six of the best Japanese restaurants in Düsseldorf

Six of the best Japanese restaurants in Düsseldorf

Some of you may have already been to Tokyo and can confirm it: You can hardly eat as authentically Japanese as in Düsseldorf's "Little Tokyo" anywhere else in the Western world. So why increase your carbon footprint when the proverbial good stuff is so close by? Below, we've compiled the six hottest tips from Europe's third-largest Japanese community. Some of the local restaurants from the Land of the Rising Sun are even decorated with stars - we will present these to you in a separate shortlist in the near future. So stay tuned! And for now, let's get to the chopsticks.

The long line that forms in front of Naniwa every day from lunchtime onwards speaks volumes: no distance seems too far, no waiting time too long to grab one of the addictive dishes at the cult restaurant on the corner of Oststraße and Klosterstraße. But what is the secret? Quite simple: the high quality, which has been consistently maintained since the opening in 1986 - and that despite the large selection. Every morning, 20 varieties of Rāmen and dishes such as yakisoba (fried noodles), tenshin-han (rice with shrimp), toriteri-don (teriyaki chicken on rice) gyōza (stuffed dumplings) and chahan (fried rice) are freshly prepared. Tantan Men (Rāmen with minced pork), Stamina-Rāmen (with kimchi) and Vegetable-Rāmen are particularly popular. Restaurant manager Mr. Kobayashi prepares the latter for vegetarians and vegans with vegetarian broths on request, although he naturally swears by the signature full-bodied pork broth for his soups. He recommends a Kirin beer as the perfect complement to the in-house soul food.

Japanese, but made by yourselves. You can practice this balancing act at Ah-Un on Hansaallee on the left bank of the Rhine. In the grill restaurant, which is admittedly far off the beaten track, you can prepare the food yourself. Each table is equipped with a grill where you can cook your fresh Wagyu beef, Iberico pork, fine corn-fed chicken, your duck breast or some shrimp to your liking. The selection of Wagyu specialties in particular is huge - so fans of the finely marbled, especially tender meat will find themselves in paradise here. To accompany the meat or fish, the chef serves, among other things, namuru - briefly pickled and blanched vegetables. But he also offers classic rice or noodle dishes. Three different Japanese draft beers prove to be perfect escorts to the spicy grilled dishes.

All good things come in threes? Exactly: Three! That's why Hotel Nikko relies on a management trio at its in-house Benkay Teppanyaki, formed by top Japanese chefs Kazuki Otsuka, Gai Ishikawa and Taiki Unno, who are jointly responsible for running the restaurant. Kazuki Otsuka has worked at Steak House Jackson Beef in Kyoto, among other places. In Düsseldorf, he worked at Nagaya and Le Flair before joining Benkay as sous chef. Gai Ishikawa, Demi Chef Japanese Cuisine, previously cooked at the Keisen Culinary Institute in Florida and at the Okura Hotel in Tokyo, where Taiki Unno was also already on the payroll, now Chef de Partie at Benkay. The restaurant promises top Japanese cuisine with show elements. At the grill stations, guests can see every move made by the gourmet chefs. All creations are prepared on a hot iron plate right before their eyes. This can sometimes cause a stir, for example when a huge flame rises for a brief moment during flambéing. For those who like it more intimate: seats are not only available at the spectacular Teppanyaki grill. Depending on the occasion or culinary taste, you can go to the Fish Corner with sushi bar or to one of the secluded tatami rooms.

True gourmets know: You shouldn't be dazzled by the furnishings. Some restaurants with ultra-chic interiors disappoint on the plate, while others with sober furnishings surprise and delight. Yabase on Klosterstraße definitely belongs to the latter category. The restaurant's bright lighting and furnishings evoke canteen memories, but as soon as the dishes hit the table, that thought evaporates in an instant. Yabase guarantees excellent sushi, but the roasted teriyaki beef, tuna steak with grated radish and ponzu sauce, or soft-baked Japanese miso eggplant au gratin with a miso-based glaze in the oven are also exceedingly delicious. The grilled tuna head with vinegar is one of the house's slightly pricier specialties that you won't find on every corner, and it opens up a new dimension in culinary terms. The Japanese diners at nearly all the side tables, feasting their hearts out on the menu, prove Yabase right: it doesn't get more authentic than this. Be sure to make a reservation.

Nagomi on Bismarckstraße is synonymous with excellent sashimi. You can best observe its artful preparation from one of the seats at the counter. Orders are taken here in English (just like the recommended reservation), and then it's off on a taste excursion. Only fish of above-average quality goes into the sashimi and sushi creations. You can choose between mixed portions for one or two people. If you prefer something warm, you can feast on udon and soba noodle soups. The fried eggplant in dashi broth, spinach leaves in sesame sauce, and squid with fermented beans also prove to be true harbingers of happiness. The curious try the Renkon chips made from wafer-thin deep-fried slices of lotus root, the tempura of Eringi mushroom or the steamed hamo fish paste served in slices. Our tip: Don't be afraid of the unknown - at Nagomi you can only win at this game!

The sushi pioneer. Akio Ando has lived in Germany for more than 50 years, but it took him a roundabout way to establish his small family-owned sushi empire. Ando was a miner and warehouse clerk - until he went into business for himself and introduced Germans to the taste of raw fish with sour rice. He opened his first restaurant in the Schadow-Arkaden in 1995, when sushi was still considered very exotic outside Japan. That has changed, not least because of Maruyasu: The family now runs a good dozen restaurants in Düsseldorf and in Frankfurt, including one on Immermannstrasse, as well as on Oberkassel's Luegallee and in the MedienHafen. By the way: Despite being almost 80 years old, the resourceful pioneer Akio Ando still takes the opportunity to stand behind the counter in person. So with a little luck, you'll get the Japanese rice speciality from the sushi ambassador himself.

You want to learn more about "Little Tokyo"? Then make sure you get a place on our "Sushi, Sake, and Japanese Lifestyle" tour. A real expedition to Little Tokyo on the Rhine!